These days I find myself wondering how pictures in a picture book are made. People draw them, yes. But how do they create such a cohesive story with their pictures?

The most conventional way of creating pictures is drawing them by hand. Nonetheless, Pictures in picture books are created with various tools:

There are also picture books that utilise traditional Japanese crafts such as origami paper flooding and kirie paper cutting. Kirie is an ancient Japanese technique traced back to the 7th century. It was used in religious ornaments and gradually shifted to washi (Japanese paper) decorations.

Kirie plays on the contrast between solid colour lines that are literally cut from paper and various background options. The background in a kirie is a flexible entirety. You can either colour – sometimes randomly – parts of the background, put the picture against the background with a pattern, or use a solid background.

Many kirie artists create magnificent pieces with their scissors and cutters. My personal experience of kirie helped me realise the possibilities of a picture.

What I learned from creating kirie

Now, the kirie I made recently was designed by Nagano-stationed artist Kyoko Yanagisawa. She authored several books on kirie. My favourite among those is the one that features the traditional Japanese lifestyle depicted in kirie pictures.

My personal experience has a simplified version of kirie. I did not create the design, I just used the template that Kyoko Yanagisawa created. Here’s a short record of the process.

To tell the truth, this is not the right way to do kirie. The right way was to gently and meticulously cut every line with a knife. Like drawing a picture, but with a paper-knife. The scissors I had were not enough sharp to cut out the small objects, so I improvised a little.

When I was a child, I used to fold paper, cut out small pieces, unfold the paper and enjoy the pattern. I usually made snowflakes with that technique. This is exactly what I did with kirie. The guru of kirie might criticize me for being too innovative. I gave it my best shot and I like the result.

Kirie technique in a picture book

To use kirie in a picture book you do not have to cut all the pictures in a book. Kirie is based on the contrast of colours, materials, and forms. In a picture book, a writer-artist may borrow some of the ways to create contrast. Have a look at the book titled Hugs (だっこだっこ Dakko Dakko) by Tsuchida Yosiharu. 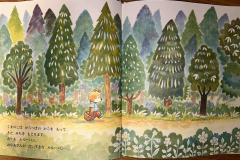 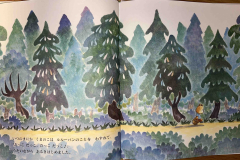